Earth=Unearth II
Pseudo-science in cabinet
2005
shown at New Contemporaries: New art from Lasalle-SIA College of the Arts, part of the Singapore Art Show

This work was an extension of Untitled: Pseudo-science in Suitcase where garbage was classified according to my own taxonomy into areas such as ‘Primitive Tools’, which included all objects resembling arrowheads and tools, irrespective of their prior use/ function, 'Mandibles, Segments and such', 'Breath of the Ancients, Preserved in Perpetuity', the last proving to be presumptuous in the extreme - this work was destroyed in 2006. (see images below). 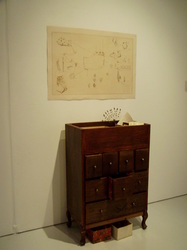 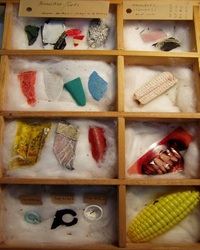 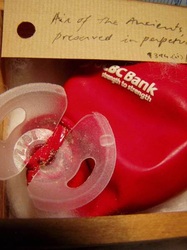